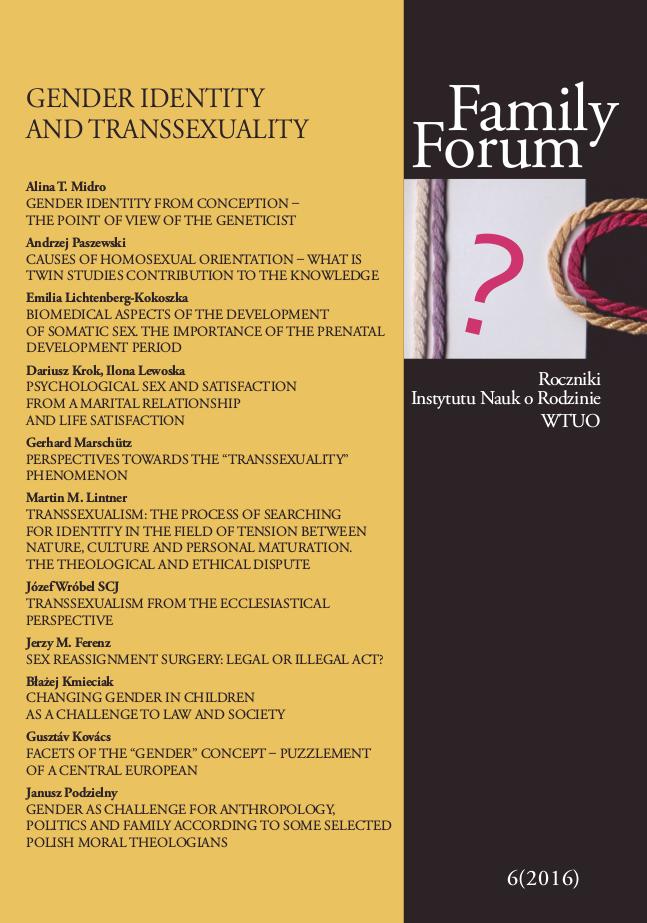 Summary/Abstract: Transsexualism concerns the form of found, not freely chosen sexual identity, which is characterized by the fact that biological sex is different from the psychological one. Somebody may have a subjective feeling of „living in a unsuitable body“, because he experiences himself as a woman, despite having a male body, and conversely. This gender dysphoria cannot be ultimately overcome, because a biological (i.e. genetical) sex cannot be changed, despite the possibility of matching the body phenotypically to psychological gender by hormone therapy or surgery. What remains is a dissociation between the biological foundations and sexual self-perception. Therefore, the task of recognition and acceptance of their sexuality can be difficult for transsexuals. So, they need not only prevention of discrimination from their social environment, but they also need support in the process of developing themselves in the corporeal and spiritual unity, so that they could find and develop their identity. This puts the issue in a fundamental debate on the relationship between biological, socio-cultural and psychological gender identity.These different aspects of sexual identity cannot be separated from each other, but they must be distinguished. Within the right to sexual self-determination, the gender debate does not mean that anyone can freely choose and change their sexual identity, but that their right to recognize, accept and shape their gender identity given to them and conditioned by biological, socio-cultural factors is acknowledged.