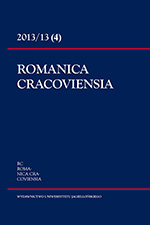 Summary/Abstract: The Aeneid is the most important intertext for the opus magnum of Dante; and Virgil, sometimes metonymically identified with his work, plays a relevant, or indeed crucial part as one of the characters in it. The main purpose of this article is, on the one hand, an analysis and interpretation of certain, only rarely investigated aspects of the relation between Virgil and Dante the pilgrim, in particular those which deal with the defeat of the former as an authority and guide for Dante on the road to spiritual perfection. They result mainly from Virgil’s excessive rationalism. In the critical moments of their journey through the otherworld Dante the author shows the frailty of Virgil’s Christian faith, attained only after his death and not illuminated by divine Grace; he also discloses the deficiencies in Virgil’s understanding of good and evil. On the other hand the author of the article analyses the intertextual “dialogue” that the Comedy conducts with the Aeneid on the basis of the Dantean conception of art in general, and of poetry in particular, taking selected examples into consideration. An essential component of this dialogue is Dante’s reinterpretation of Virgil’s masterpiece, which assumes the form of an aemulatio and tends to reveal the Christian potentiality in the Aeneid, of which Virgil the poet was, of course, utterly unaware.