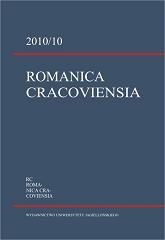 Summary/Abstract: The article presents an analysis and interpretation of the tragic element in Giambattista Giraldi Cinzio’s Orbecche, the most renowned of this writer’s tragedies and the work which was the Senecan pioneer in the Italian Cinquecento, opening up a new chapter both in the history of this genre in the Renaissance and in his own oeuvre. The influence of Seneca may be observed above all at the level of its poetics of tragedy, in the characters, the conflict between furor and ratio, the sinister visions of the prologue, and the bloodthirsty scenes of violence and horror, some of them actually performed directly onstage in breach of the principle of decorum. One of Giraldi’s patent innovations is his departure from the mythological and historical subjects and focus on what might be termed “novelistic” subjects (the plot of Orbecche alludes to one of his novelle, while another would supply the story of Shakespeare’s Othello). Aristotle’s Poetics and its theory of tragedy was an important source of inspiration for Orbecche. Giraldi devoted a considerable amount of attention to an interpretation of the Aristotelian theory, especially its aspect of katharsis, in one of his theoretical works, Discorso intorno al comporre delle commedie e delle tragedie, and hence for a better understanding of the essence of the tragic in Orbecche this analysis makes numerous references to Discorso