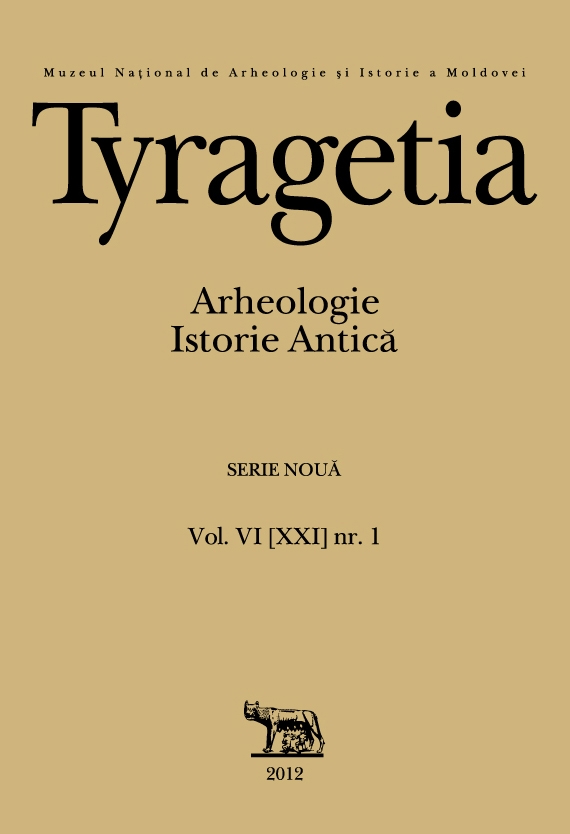 Summary/Abstract: The Saharna Mare site (Rezina district) stands out among the monuments of the Middle Dniester area by its location and the degree of scrutiny. It is situated on a high rocky trapezoidal cape with an area of about 12 hectares, surrounded on three sides by deep canyons with inaccessible shores. Only from the south the cape is connected to the outside world.This article contains information about finds relating to the Cozia-Saharna culture, which were discovered as a result of the excavations of 2009-2011 carried out by five digs (13, 13A, 14, 15, 18) with the total area of 444 m2. Through the matching of orthophotomaps, the results of geomagnetic studies, and archaeological research data in the southeast of the cape there were found the remains of a “citadel” and the adjacent “fortified yard”. The “citadel” of a rounded shape, size 60×64 m (about 0,32 ha), was located on the southeastern out- skirts of the cape; it was reinforced on all sides by a moat and a wooden stone-earthen wall. The width of the moat varies from 4,2 to 6,0 m, depth – 0,7 to 1,6 m. The wall was built of two rows of wooden pillars dug vertically into the mainland loam. The space between rows was filled with stones and earth, thus forming a fortification of about 1,0-1,2 m in width.Most likely, these fortifications were designed to shelter residents of the Saharna “Dealul Mănăstirii” settlement, which was in close proximity. In addition, the “citadel” could serve as a socio-political and religious center for the Early Hallstatt population of the Saharna region.