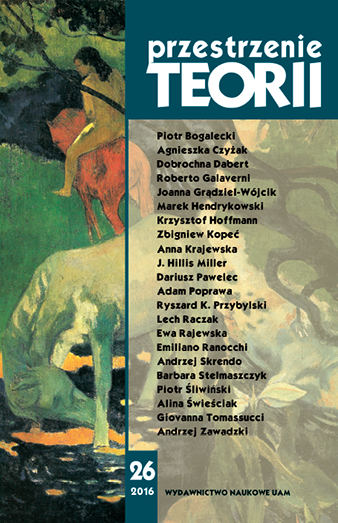 Summary/Abstract: This article covers a particular form of Wisława Szymborska conceptism, her Thought fugues, which turns the world’s elements upside down and deconstructs them, uncovering their antinomies. The described reality takes the form of a concatenation, it is elliptic, based on seemingly symmetric tessellations, but in essence triggers some logic turns. It is possible to discern a similarity with advertising rhetoric and its constant variations of sense based on oppositions, such as double meaning, antiphrasis, paradox, or tautology. In all of which Szymborska is able to notice the condensing of meaning, or even some oxymoronic proper- ties. It is perhaps this reason why her poetry is accessible to such a wide audience across the world. Though frequently condemned by 20th-century thinkers as a mere pleonasm, tautology becomes for the poetess a fluid material useful for her dialectics of imagination. Szymborska does not see language as a mirror of the world, but rather as an act of creating new worlds and new forms of life, like Wittgenstein did in his theory of language games. This is why she prefers such word games more than other poets. Due to their dual nature, tautologies constitute a potential and permanent element of Szymborska’s conceptual games.