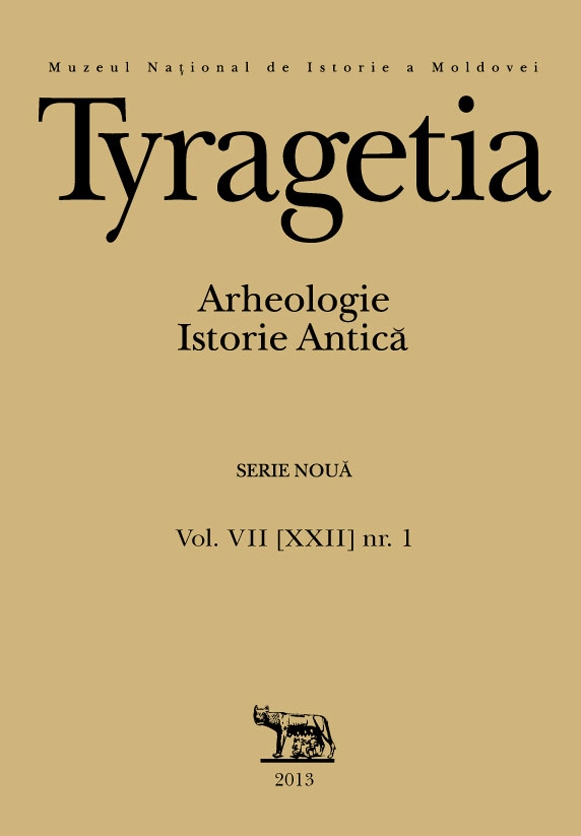 Summary/Abstract: This article presents information on the findings relating to the Thraco-Getian period, which have been identified as a result of archaeological excavations in 2009-2012 on the site of Saharna Mare.In examining orthophotomaps and the results and geomagnetic prospecting there was discovered a new defensive line traced over 650 m to the north, east and south sides of the cape. Its ends are connected to the "wall" on the west side, thus forming an integral defensive system surrounding the fortress on all sides and having an area of approximately 6 hectares. This recently discovered defensive line represents a "rampart" barely visible on the current surface of the soil, having at the base a width of 3 m and a height of about 0.3-0.4 m. Toward the east this "rampart" meanders, forming eight bastions grouped in four on the northern and southern flanks.As a result of archaeological investigation it was found that the identified "rampart" is the remains of a defensive wall built of two rows of wooden poles dug vertically into the mainland. The space between rows was filled with stones and earth, thus forming a fortification of about 1.1-1.6 m width.In the settlement there were also examined two above-ground structures, 36 household pits and fairly rich and varied inventory attributable to the 8th/7th - 3rd centuries BC.Judging by its strategic location, powerful defensive structures, and by the findings found in the area of the site, it can be assumed that the fortified settlement of Saharna Mare was an important economic, political, administrative and military center of the Middle Dniester region.