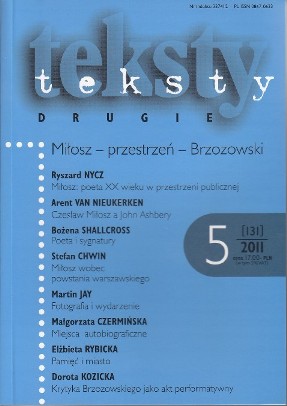 Summary/Abstract: The interrelation between C. Miłosz’s resolutely reluctant attitude toward the Warsaw Uprising and the core of his intellectual/artistic personality is worth considering. In its first section, this article analyses the poet’s moral, political and, in broader terms, historical way of thinking about the 1944 event (his attitude toward the Home Army and the policy of the London-based Polish Government in Exile). The ways in which Miłosz’s diagnosis was dependent upon how the situation of Poland would evolve after the possible victory of the Red Army over the Third Reich are also subject to analysis. The second section reconstructs the image of the Uprising as portrayed in Zdobycie władzy [‘The Seizure of Power’]. This depiction heralded an antinomy between the natural-sciences-based Darwinism, as a key to understanding history, and a sense of deep contradiction between the order of moral values and the rights of nature – the antinomy of importance to this author’s later-period works.