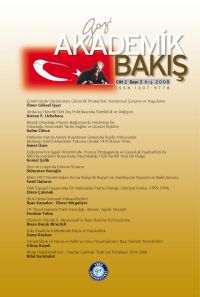 Summary/Abstract: At the end of World War I French forces which occupied Çukurova, were not very successful in the battle and could not defend the posts in the Taurus Mountains. Although their battalion broke through the siege and a provisional armistice was signed, Turkish National Forces captured them as prisoners. French forces made Turkish people leave Adana, known as the ‘Kaç Kaç’ incidence, and these people moved to Taurus Mountains, where Turkish National Forces were deployed and while these people were moving off the French told them, through their propagandists and spies, that the Turkish National Forces were not so powerful as they thought not only in terms of the number of soldiers but also of the amount of arms. Therefore they tried to spread despair among Turkish people and also cause discord between these people and the National Forces with the aim of getting firmly established in the region. Moreover, the French embarked on more aggressive military operations with the aim of establishing its position more firmly in the region. In return, the Command of the National Forces in Kilikya released the document, titled ‘To Fighter Citizens’, in order to alert local Turkish people against this deception. This newly discovered document, dated 1920, is presented here-in-below.