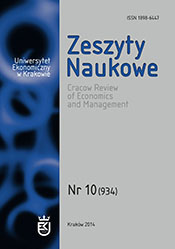 Summary/Abstract: This paper investigates how local market features influence the decisions taken by Polish banks regarding their branch networks. It was found that during the period 2007–2013 the density of branch networks was highest in relatively rich and urbanized regions. However, the rate of growth in the number of branches was more rapid in regions whose density of branches had hitherto been lower. It was found, moreover, that the presence of an entrepreneurial population had a positive impact on both the density and growth rate of branches.