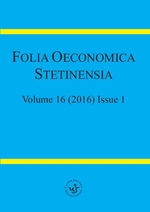 Summary/Abstract: The increase in income and wealth inequality observed in the last decade of the twentieth century and the first decade of the twenty-first century is the subject of many analyses and discussions. Research shows that major changes in household incomes in Poland took place in the early years of transition (1990–1992), known as a ‘revolution in income’. The article focuses on the assessment of the degree of household income inequality after the Poland’s accession to the European Union. The most commonly used measures in income inequality studies are the measures of inequality based on the Lorenz function – a popular Gini coefficient and the Schutz ratio, measures using the concept of entropy, measures based on welfare function, or measures based on income distribution quantiles. The article proposes the possibility of broadening the measuring spectrum of income inequality analysis of the Csiszár’s divergence measures. The main research objective of the article is to assess the divergence in the distribution of household equivalent disposable income in Poland in the years 2005–2013. The data used in the analysis come from the European Survey on Income and Living Conditions (EU-SILC).