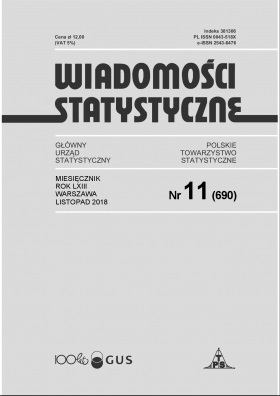 Summary/Abstract: The aim of the study is to verify the hypothesis of a tendency towards levelling of household income in the EU countries in the years 2007—2015. Convergence process of the level and the distribution of household disposable income was analysed. The basic source of information were Eurostat’s data from EU-SILC database. The convergence analysis of income levels was carried out for the mean, median and first decile of annual equivalised household disposable incomes, weighted by country population. To examine their convergence, regression models used in economic convergence analyses were adapted and the concept of absolute β convergence was used. In the study of income distributions convergence the income distribution in households by decile groups was used, and the degree of their discrepancy was assessed using the generalised form of the Jensen-Shannon divergence measure. The study was conducted for 27 EU countries, 15 of the old EU states and 12 new member states. On the basis of the obtained results, it was concluded that there was no convergence of the distributions of income by quantiles. However, the convergence of the considered characteristics of income distributions (mean, median, first decile) was observed.