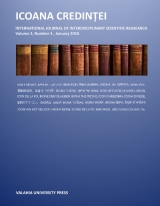 Summary/Abstract: Out of the four fundamental concepts or pillars of Indian religious thinking thepresent paper aims at disclosing the meaning and significance of the law ofuniversal causality that binds man and cosmos, and condemns the former to anindefinite transmigration, i.e. the law of karma. This pan-Indian term will beunderlined as it is reflected in the most important Upanishads and inBhagavad Gītā, the gospel of Hindu spirituality. On the final part a parallel –between this concept and the teaching about the role of facts in the process ofsalvation according to the Orthodox Christian theology – will be drawn. Inshort, karma is a sort of law of causality that makes any action committed byindividual leaving behind it a kind of force that causes the joys and sorrows oflife, as the action was good or bad. According to Orthodox Church’s teachinggood deeds is, along with faith and grace the subjective conditions ofsalvation, i.e. personal appropriation by every man of the objective redemptionbrought about by Jesus Christ, the God-man. This appropriation calledsalvation or sanctification is not simply a gift from God, but a permanentaction that lasts throughout human life. If the law of karma acts implacablyand independently to the will of man, stamping a fatalist character to life andundermining the human freedom, in Orthodoxy, however, man is not alone, butpermanently assisted by the divine grace. But grace does not work irresistibly;it respects human freedom, so the facts present an obvious synergeticcharacter. Therefore, between the Christian teaching on facts and thephilosophy of the act, as it emerges from the Upanishads and the BhagavadGītā is an abysmal distance that comes to differentiate these two religions onthis level as well.