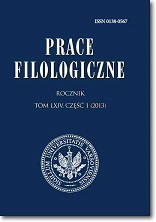 Summary/Abstract: The wave of interest in folklore and Lithuanian language that began in the 19th century resulted in the compilation of numerous translation dictionaries, in which Polish was the primary language or it was used for the translation of Lithuanian entries. Subsequent fate of these dictionaries, compiled by bilingual authors natives of the Lithuanian petty nobility (Polish: drobna szlachta), proved to be extremely complex, and many of the works were lost once and for all. Lithuanists have been lively interested in the preserved manuscripts, treating them as an interesting source for researching Lithuanian language of the 19th century. It was much later that Polish linguists developed interest in this important legacy. Over the last decade, some of the translation dictionaries were published as duplicate originals: the Samogitian-Polish Dictionary (attached to the anonymous grammar from years 1820–1830); the Polish-Lithuanian, three-volume dictionary by Szymon Dowkont (Lithuanian: Simonas Daukantas), carefully edited by Giedrius Subačius; and the master critical three-volume edition of Polish-Lithuanian Dictionary by Wawrzyniec Iwiński (Lithuanian: Laurynas Ivinskis), prepared by Ona Kažukauskaitė and Rita Šepetytė in 2010. These sources have given an open access to valuable resources for the Polish language historians, documenting nineteenth-century Polish of bilingual and bicultural writers from ethnic Lithuania. While the authors of Polish-Lithuanian translation dictionaries often borrowed the entries from other dictionaries, particularly from Samuel Bogumił Linde’s Dictionary or the so-called Vilnius Dictionary, nevertheless they brought to their works many regional characteristics, ranging from the graph to the lexis. Highly expected would be the in-depth examination of the Polish material in the contexts given in the translation dictionary by Dionizy Paszkiewicz (Lithuanian: Dionizas Poška ) and in the rich lexicographical legacy of Antoni Juszkiewicz (Lithuanian: Antanas Juška). The latter perceived reality in a way that is close to ordinary human experience. It is probable that the manuscript of the first edition of the Lithuanian-Polish dictionary by Father Juszkiewicz was known to Jan Karłowicz.