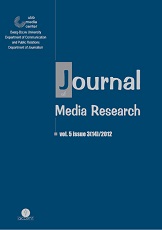 Summary/Abstract: From the day WikiLeaks documents were published on the Internet, the subject has held the front page of the newspapers all over the world. My hypothesis is that the propagation of the new media leaded to an extension of the public sphere, as we knew by the time being. This paper has references to concepts like public sphere (and its transformation in years), mass movements, and new media. I would like to summarize the concepts and to show the relations between them and the topic of the research paper, in order to create a background for the methodology section. This paper studies WikiLeaks as an instrument for more evolved forms of public sphere, and the reasons for this claim are explained in the article. In addition, in this research paper I would like to analyze worldwide politicians’ reactions to WikiLeaks disclosures in the public sphere. The methods used will be qual itative, by analyzing a discourse of Hillary Clinton and I will also conduct an analysis on other worldwide officials’ reactions to these disclosures, based on interviews from different newspapers.