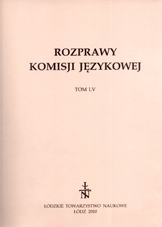 Summary/Abstract: The article is touching the issue of appearing of new languages from regional variants of Polish language in the rage of Polish ethnical areas. The author outlines the historical background of the processes of linguistic emancipation and some legal issues. He establishes essential terminology. The factual basis of deliberations is constituted by a history of Kashubian and by discussions on the status of the Silesian language. The author characterizes an outlook on Mazurian language, Podhale region language and Podlasie region language too. The author outlines four stages of a language appearing. The first stage is determined by establishing in social awareness of a given group a conviction of their own ethno-lingual identity and mythologization of that identity. The second stage is a declaration of one’s own identity. The most important is social and scientific discourse conducted over he issues of the regional language. The third phase is made by works on standardization and codification of a language. The essence of the fourth stage is implementing and propagating of norms. Particular stages of emerging of a new language have an universal character. Particular links need to appear, however in some specific indications they will differ considerably in the ways of realization. They can overlap each other, reduce specific processes, weaken temporarily in order to appear again after some time.