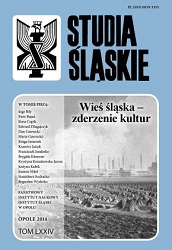 Summary/Abstract: In the first part of the article the author determines his methodological approach. Language is seen as anthropological phenomena, and that eventually, it results in underlining the role of language awareness and pragmatic factors in language changes’ characteristics. The idea of dominating lan- guage as differing or language variation’s unifying factor, is introduced. In the second part, the author characterizes some stages in Polish dialects’ development from Middle Ages, concentrating his atten- tion on Silesian dialect. Decades after 1945 are the most important period in Silesian dialects’ evolution and is called the first communicating turning point. Silesian dialects appeared in the sphere of direct affection of Polish literary language. The second communicating breakthrough starts after 1990 when the dialect emancipation stage began.