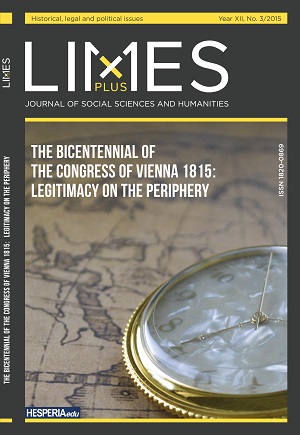 Summary/Abstract: The Congress of Vienna and the Second Treaty of Paris marked not only the year of the final Napoleon defeat but the sealing of the European system that was supposed to last. The Ionian Islands were the British prey during the Fifth and the Sixth Coalition against Napoleon and, after the 1815, their status under British protectorate was established. The islands were a free and independent state under the immediate and exclusive protection of the British Crown. The Lord High Commissioner – the new Provveditore Generale appointed by the British Monarch, was to regulate the forms of the convocation of a Legislative Assembly. The result of that was a new Constitutional Charter of the States that had to be ratified by the British Crown. The situation at the Ionian Islands, which had changed already four administrative systems since 1797, was very unpromising with the civil war fought between different islanders’ sides. By the Treaty of 1815, the Ionian Islands were supposed to have far more control of the internal affairs but the situation on the ground was encouraging to the very rigid Constitutional Chapter of 1817. The consular dispatches that are the most important archival source show the fear of the anarchy. The experience of internal fights among islanders was important for understanding of the attitude of the Great Powers towards the Greek Revolution at its first stage in the early 1820s. Both Greeks of the Mainland and the islanders from the former Septinsular Republic (Repubblica Settinsulare) shared a lot of common experience in both governing and fighting since the last decade of the 18th century. In the years after the 1815 with the outbreak of the Greek Revolution, their cooperation and experience had an important role in changing of the Ottoman borders.