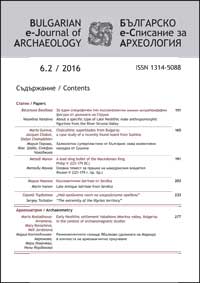 Summary/Abstract: In his work “De aedificiis” Procopius of Caesarea ends the description of Justinianic fortifications along the Ister River within the confines of Illyricum naming two sites located “at the extremity of the Illyrian territory” – Lapidarias and Lucernaria. The second one is mentioned once again in the following text of the treatise as a topographic marker, eastwards from which the territory of Thrace begins. The first part of this paper provides comments on the written evidence and presents a thorough critical analysis of its interpretations. The second part of the paper is focused on the existing localization hypotheses concerning both sites. They are decisively rejected, as being in obvious discrepancy with the ancient literary evidence, the geographic and archaeological realities. The last three parts of the paper are based on the results of recent ground surveys and the use of sources of information, some of which are non-traditional for an archaeological study, together with discarding the far going misinterpretation of the facts often featuring in many modern studies. Lapidarias is identified as the fortification situated in the locality Karierata/Borunya at 1 km to the northeast of Somovit. Lucernaria was placed in the locality Manastirishte at 1 km to the northwest from Cherkovitsa. The Roman Danube road between Anasamus and Utus did not follow the Danube bank, but was traced across the heights between the the Osam and the Vit Rivers.