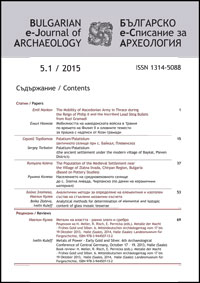 Summary/Abstract: The paper presents a thorough critical analysis of the available information on the ancient settlement under the modern village of Baykal, Pleven District, which was convincingly identified some 35 years ago with Palatium and Παλατίολον/Παλάστολον, known from the Late Roman and Early Byzantine written sources. The impor¬tant corrections in connection with the previously expressed views, as well as personal ground observations and reinterpretation of the evidence, enable the author to state a new and different perspective of the ancient history of Baykal. This article is the first one of a planned series of publications designed to bring clarity and reject the existing defects in the current interpretation of various aspects related to the nature, structure and history of the Roman Danube Limes within the borders of Bulgaria.