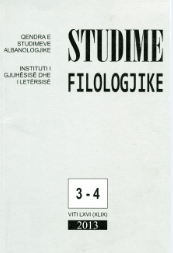 Summary/Abstract: The narration can be considered like a part, not at all side passing of Petro Marko’s creation, which, though is not treated as much as it must, deserves attention. In general, we have seen to be studied and discussed his novels, he is considered only like a novelist, sometimes like a publicist, while that, with short stories start his first publications in the press of years ’30. Short stories precede the participation in the war of Spain, deportation and camps; they accompany the edition of novels and continue till in the end of his life. Short stories of years ’60 find out petro Marko like a formed writer, who has full control on the language and expression of emotion, that is an unseparated element and a distinctive feature of his creation. In our treatment we have expressed the question: with what elements Petro Marko has been able to publish his short stories, how and where it is appeared, where the compromise is smoothed and where the missing compromise is forced to make the same with regime one of writers and more idealist people. This deviation the author could realize through his creation with the themes from the past that forcibly couldn’t be seen in revolutionary development, through short stories of “Hosteni” periodical. The compromise is shown clearer in a row of short stories that have in the centre the unmasking of clergy.