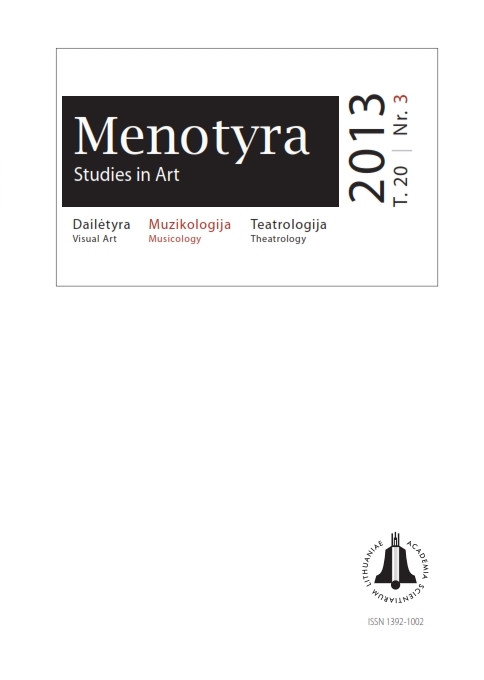 Summary/Abstract: While researching Lithuanian sacral music genres of the 19th c. one may find a lot of space for interpretation: which genres were dominant, why they were dominant, what determined their popularity, etc. But in writing this publication, attention paid to the processes and their personalities - creators and genres -– was based on general multi-cultural principals and archival sources. The sources are historians’ treasures, and while identifying them in this case it is important to accentuate what was innovative, what strengthened or weakened the Lithuanian sacral repertoire. These are the main points of the publication. This article is a continuation of the author’s publications dedicated to the research of the Lithuanian sacral music of the 19th c. In the 19th c., the Lithuanian political and cultural situation was extremely complicated. For the survival and strengthening of the nation, support could be provided only by the Church as a significant moral resistance. In music, this attitude was expressed by the leaders and members of the Church vocal–instrumental choirs, local creators. One way or another, only thanks to these people and their efforts the sacral musical culture continued to develop towards high professional perfection.In the 19th c., Lithuanian sacral choir repertoires consisted of compositions including various genres, consistencies and forms. One method of musical composition, which was based on the music sounding during the Mass and on the professionalism of the local authors, dominated in a certain choir most of the time. Therefore, the amplitude of the sacral genres of the 19th c. was extremely vast – from the Gregorian chant, one-voice and two-voice vocal compositions to multi-voice choirs a cappella and vocal–instrumental creations (the Mass, litanies, vesper, etc.) Even if genres were the same during composition, in the end their structure, form, scope, musical material and other characteristics were quite different.During the reviewed period, the genres of the sacral music were created in two ways. One group of compositions was directed towards sacral purity and tradition. The second group was close to exaltation – elevated by the sensual Romanticism and creations of free form composed in Polish in the first half and the middle of the 19th c. and in Lithuanian at the end of the 19th c. One of the marginal characteristics in Lithuania was the retirement of professional musicians from service in Church. In the second half of the 19th c., it was impossible to stop this process. The first to go were vocal–instrumental choirs; this was caused by two problems; (i) there were no professional instrumentalists who wanted to play during the service (with the change in the public taste, orchestra became tightly connected to secular music), and (ii) for the Church to support choirs became too expensive. In the middle of the 19th c., organists remained the only examples of professionalism in most churches. Even a higher freezing point for the sacral music and genres was reached in the middle of the 19th c. when in most churches professional choirs were substituted by the amateur groups created from the local parish communities. Church choirs recovered only at the end of the 19th c. when a new wave of choirs was raised, which influenced the entrenchment of a new genre in the repertoire.