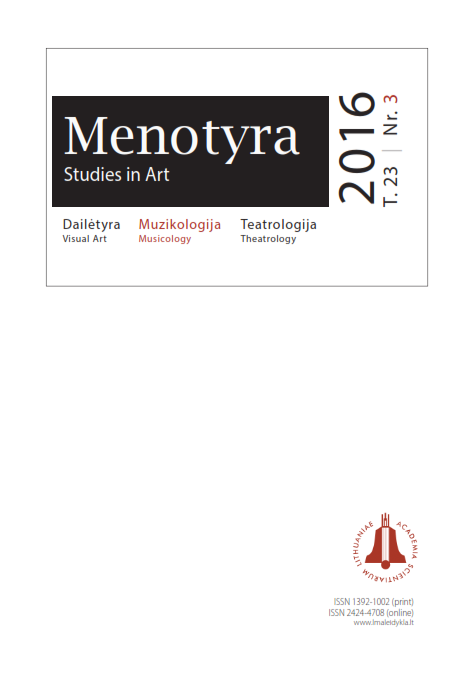 Summary/Abstract: Based on literature and manuscript documents from the 19–20th centuries about educational processes in Catholic and Orthodox seminaries, this article presents a discussion of musical education in three 19th-century institutions: the Lithuanian Seinai, Polish Vilnius and Russian (Orthodox) Vilnius (Lithuanian) priests’ seminaries. The aim is to examine how musical education of priests was organised in the 19th century and the artistic activities in seminaries from different dioceses (Vilnius and Seinai) and confessions (Catholic and Orthodox). The article gives an overview of teaching programmes in the seminaries, the public and concert activities of seminary students, and individual figures. In the Catholic Vilnius diocese seminary in the Russian Empire’s Vilnius general governorate, education was organised in accordance with the general seminary provisions released in 1843 that applied to all Catholic seminaries. The Seinai (Augustavas) diocese belonged to the Kingdom of Poland (and only after the uprising of 1863–1864, to the Warsaw general governorate), thus the afore-mentioned provisions for priests’ education did not apply there. There was no uniform education programme for seminary students in the Kingdom of Poland, and during its entire existence, the preparation of an education plan for the Seiniai seminary depended on the competency of local bishops, the seminary’s leadership and its professors. Compared to other Catholic seminaries, attention to Orthodox education in the Russian Empire was very intense: there were regular educational reforms, study plan reviews, and papers were published on the theme of education. Renowned pedagogues such as Aleksandras Waszkewiczius and Joachimas Glińskis taught singing at the Vilnius seminary. Ignacijus Ivanovas, who taught at the Vilnius (Lithuanian) seminary, is mentioned in sources as a teacher who worked and taught singing in several Vilnius seminaries and religious schools, even being recognised for his activities in this field and granted the title of honorary citizen of the city in 1891. Vilnius city seminary students were regular participants in the city’s concert life, organised church and secular music events, staged drama performances, sang in choirs and performed in instrumental ensembles. At the Seinai seminary meanwhile, Lithuanian nationalist attitudes prevailed: the seminary students compiled Lithuanian books, collected folklore material, recorded the particularities of the Lithuanian languages, prepared Lithuanian religious literature and even assembled a Lithuanian clerical choir. Even though Lithuanian spirit was not outwardly encouraged in the official educational process at the Seinai seminary, it did undoubtedly influence the world view of its future graduate priests.