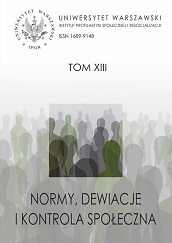 Summary/Abstract: We claim that at the end of the second decade of the 20th century, sociology as a scientific discipline was spread almost all over the world and institutionally integrated. However, after one hundred years of expansion and development, the status of sociology has definitely undergone some changes. The identity of sociology as an academic discipline has not only become more defined but also more amorphous than ever. There appear claims that sociology has come to its crossroads because all of its findings and procedures are being questioned. First of all, the perspective of interdisciplinary, built with such great efforts, is no longer sufficient enough, especially that emerging disciplines go beyond the traditional areas of sociology and at the same time can perfectly do without it. Apparently, sociology practiced according to existing models and procedures is coming to its end. The solution to this crisis may, as it is claimed by some sociologists, come from post-disciplinarity, i.e. the questioning of the existing boundaries of sociology, its foundations, assumptions, research methods, language and aims. In our opinion the claim for post-disciplinarity, as it is the case of post-modernity, is rather ambivalent. A major negative aspect of post-disciplinarity is its epistemological eclecticism combined with the narrative not subject to any rigor or rules. The paper ends with the question of whether those who opt for post-disciplinarity and welcome it with hope do not resemble constructors who build houses on the sand.