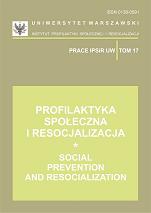 Summary/Abstract: The author presents a critical analysis of the position of Maria Ossowska regarding the distinction by Leon Petrażycki between legal norms and moral norms. At the beginning, we evoke discussion remarks made in this respect by Jerzy Lande. Next, we discuss those ideas of Petrażycki which are then referred to by Ossowska in her writings. We try to underline the discrepancies between Petrażycki’s original thinking on the one hand, and its interpretation ventured by Ossowska, on the other. In the main part of the paper, we attempt to prove that the assumption attributed to Petrażycki by Maria Ossowska, claiming that his distinction leaves but meager remains to the morality may not be fully accurate. Even though, according to Petrażycki, legal norms (positive and intuitive) play an essential part in the social life, the general guiding light in human relations is shed by moral norms.