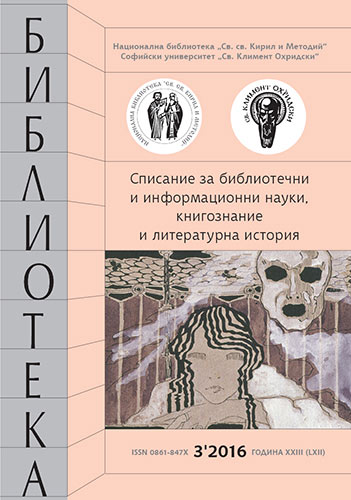 Nikolay Liliev’s and Emanuil Popdimitrov’s poetry and Geo Milev’s literary projects, or on poets’ alienation and the decline of poetry.

Summary/Abstract: The paper deals with the encounters and the partings of the artists of a brilliant poetical generation. It has been built on the reverse chronology of publications by N. Liliev and E. Dimitrov in the literary editions of Geo Milev, who was their junior, until they met each other on the pages of the Zveno magazine(1925–1914). Parallel to this plot about poets and literary projects falling asunder,in society forces are being united that will impose an anti-constitutional and non-parliamentary government in the country. The counterpart of the Zveno of 1914 – the young Modernist poets’ magazine – is the 1928 Zveno, the organ of the newly-established political circle that will persist in staging coup d'etat's and exercising political violence in recent Bulgarian history.