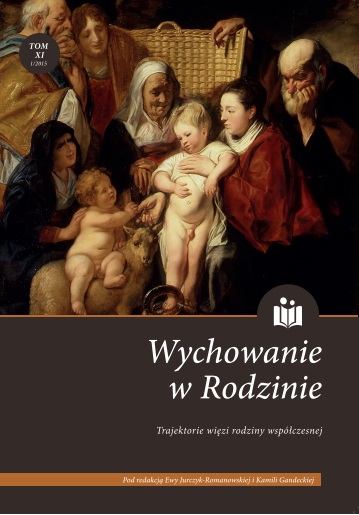 Summary/Abstract: One of the developmental tasks imposed by early adulthood is autonomy expressed through residing outside the family home. This feature is more and more often shifted over time, and the phenomenon of the deferment is becoming more common among young adults. Extending the moratorium is confirmed by studies of social reality: more than 40% of people over 30 years old remain dependent on their parents. Young adults do not take on a life consistent with the perception of adulthood prospects in scientific terms: they do not move out of the family home, do not take work or they abandon it because of the unsatisfactory earnings. Among the factors favouring such choices shall be both the psychological and the emotional immaturity of young people and the economic conditions that make it a difficult start in adulthood. Allowing for the return to the childhood situation of biologically adult people involves the whole family. Parents of „immature adults” not only do not part with their children still residing with them in one house, but also increasingly assume the maintenance costs, justifying the need for a common existence by socio-economic conditions,that prevent the financial autonomy of the younger generation. Sometimes the choice is made by the young people themselves. Frustrated by the lack of jobs and prospects to for go dreams of independence, accepting the role of „not adult adults”. In this article I present the reasons for postponing adulthood included in the conclusions from studies of young adults residing with their parents.