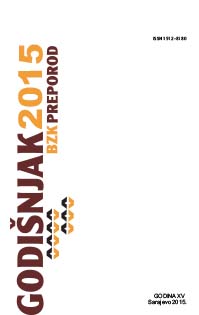 Summary/Abstract: Continuity of conquering-expansionist and genocidal policy towards Bosnia and Bosniaks, escalated at the end of the 20th century, when the Great- Serbian aggressor (Federal Republic of Yugoslavia / Serbia and Montenegro) started the aggression - the war of conquest for territories (“living space” - lebensraum). The armed aggression against the Republic of Bosnia and Herzegovina and occupation of its large part, was the part of the Great Serbian project (Plan “RAM”), which was based on the unification of all ‘Serbian countries’ and Serbian people. Bosniaks were massively and individually killed, expelled, sexually abused, wounded, taken to concentration camps and other places to imprison, tortured and disappeared by force, their property was robbed, and religious and cultural monuments were destroyed. Podrinje region (Bijeljina, Zvornik, Bratunac, Srebrenica, Vlasenica, Žepa, Rogatica, Višegrad, Goražde, Čajniče and Foča) is the area of strategic importance in the Great- Serbian policies and practices, which meant the elimination of the Drina River as a border between the ‘Serbian states’, and ‘clean Serbian’ territory in the area 50 km west of the Drina river. Genocidal character of aggression has been proved in 1992, occupying much of Podrinje region where about one-third of the Bosniak population has been driven in several enclaves (Goražde, Žepa, Srebrenica, and triangle Cerska - Kamenica - Konjević Polje). At the beginning of 1993, by Serbian offensive were occupied Kamenica, Cerska and Konjević Polje, which the size of the Srebrenica enclave was reduced from 900 to roughly 150 km2. Bosniaks of nearby areas were driven to the town of Srebrenica, which population increased to about 60,000 people. In the difficult conditions of the siege (no water, electricity, food, medicine and other necessities for living, which were forbidden by the Great- Serbian forces) population has been survived relying on the protection of the United Nations, until July, 1995.