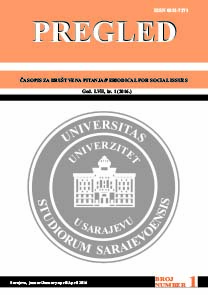 Summary/Abstract: The aggression against the Republic of Bosnia and Herzegovina and occupation of a large part of its territory from 1992 to 1995 is a part of the Serbian irredentist project and continuation of the conquering/ expansionist and genocidal politics towards Bosnia and especially against Bosniaks as an important factor of the Bosnia and Herzegovina‟s sovereignty. The most massive and the most heinous crimes, as well as the destruction of religious and cultural monuments were committed in the name of fulfilling the determined set up plans. Carrying out of those procedures and processes resulted in significant disturbances causing the revision of population‟s socio-demographic structure. The negationism as the final stage of the genocidal process is further destabilizing the internal socio-political relations and complicates democratic processes undertaken to strengthen the country‟s capacity, its sovereignty and territorial integrity.