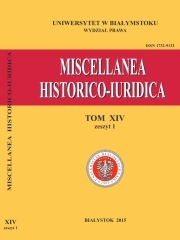 Summary/Abstract: The Second Polish Republic, which came into being in November 1918, adopted the legislation of the partitioning states which deprived women of the right to participate in public life. Alongside with regaining independence, women obtained full election rights and had their representatives in all parliaments of inter-war Poland. The principle of gender equality was raised to the constitutional level by the Basic Law (Constitution) passed in 1921. In the following years of the inter-war period, women obtained the possibility to be employed as civil servants, barristers, judges and prosecutors. In spite of the formal equality, public authorities avoided appointing women to more important posts and tolerated practices which were in breach of the Constitution and aimed at limiting the participation of women in public life. The lack of an organ appointed to inspect the compatibility of bills with the constitution and weakness of women’s communities was obviously conducive to this process. The full realisation of the gender equality principle, both in the field of legislation and the practice of everyday life, would take place after the Second World War.