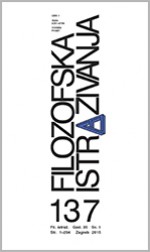 Summary/Abstract: This paper discusses the fragment DK B6 of Parmenides’ poem. The author defends the thesis that the most coherent interpretation of DK B6 were as follows: at the beginning of the fragment the goddess offers the criterion of truthful talking and thinking, and demands from her student to follow it; then, she requires the student to traverse both ways of inquiry, the way of truth and the way of mortals. After that, she exhibits some characteristics of the opinion of the mortals, as well as their crucial mistake; at the end she says that for the mortals there is a backward way, or a way out, which would consist in their return to what was said at the beginning of the fragment, or in their return to the criterion of truthful talking and thinking. Advanced reading of this fragment is taken as the basis for a more general reinterpretation of the thoughts of the famous Greek philosopher. The paper defends the thesis that Parmenides in his poem basically talks about two, not about three ways of inquiry. The paper also defends the thesis that the backbone of exposition of the poem represents a conflict between two prima facie acceptable intuitions: intuition about the criterion of truthful talking and thinking, and intuition incurred on our sensory experience of the events in the world, which Parmenides called the opinion of the mortals. In general, the thesis is that Parmenides accepted the first intuition, but that his radical interpretation of it lead to the rejection of the second.

Politika i filozofija (Moderni raskol: značenja i posledice) Politics and Philosophy (Modern Schism: Meanings and Consequences) 2004 Kalam kosmološki argument Kalam Cosmological Argument 2011 Religijska tolerancija u Milanskom ediktu i u Ustavu Medine Religious Tolerance in the Edict of Milan and in the Constitution of Medina 2013 Filozofija religije u 21. stoljeću Philosophy of Religion in the 21st Century 2019
2020 © CEEOL. ALL Rights Reserved. Privacy Policy | Terms & Conditions of use
ICB - InterConsult Bulgaria ver.1.5.0917