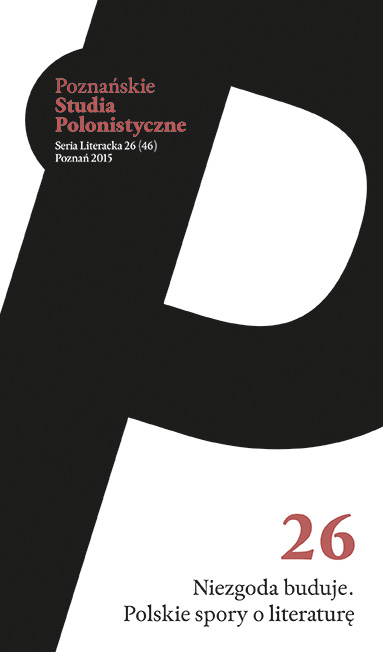 Summary/Abstract: In this article, I review the history of the “Borowski case” and place special emphasis on the latest dispute over the author of “Pożegnanie z Marią” which broke out between Andrzej Werner and archbishop Tadeusz Życiński. A recapitulation of the most significant features of the contradictory mental traditions of martyrdom literature and Borowski’s prose is followed by a discussion of the discourses from the 1940s. In the subsequent part of the article, I present the dispute over Borowski from the 1970s which accompanied the publication of Ucieczka z kamiennego świata by Tadeusz Drewnowski. Reference has also been made to the reviews from the 1980s by Jan Walec, Anna Łukowska and Małgorzata Dziewulska. A major part of the article has been devoted to the dispute over Tadeusz Borowski’s life choices and works published in 2007 in “Gazeta Wyborcza”. It was a dispute between Tadeusz Życiński who accused Borowski of “hatred of the differently minded” and Andrzej Werner who defended the writer. A moderate statement by Sławomir Buryła shed more light on the dispute; in his text entitled Katoliczka, patriotka, antysemitka (2008) he emphasized Borowski’s radical moralism. In this article, I provide the reason for Życiński’s ostentatious repetition of the seemingly out-of-date arguments against Borowski, I indicate the culture-related context of the archbishop’s opinion (the conservative Polish Catholic hierarchy). It was expressed at a time when a new list of required reading books was being created in 2007: Borowski’s stories from the Auschwitz concentration camp were to be replaced with a novel by Zofia Kossak-Szczucka.