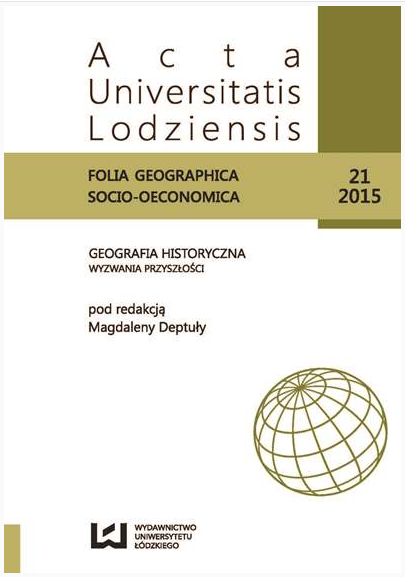 Summary/Abstract: Large informative potential of archive maps makes them a valuable source of spatial and attribute data for historians, geographers, archaeologists and planners. Since their proper application in GIS (Geographic Information System) often requires a proper database elaboration, there have been proposed several concepts of historical spatial databases. However, they do not include the full range of topographic maps’ content, and they were primarily based on secondary data sources (e.g. atlases, dictionaries). The aim of the paper is to propose the concept of topographic objects’ modelling in historical databases which will be based on archived maps in various scales developed over 150 years (eighteenth/nineteenth century – half of the twentieth century). Relating the data with current maps will be available through the connection between planned repository and contemporary spatial databases, e.g. Polish national Database of Topographic Objects (BDOT). In the project materials including Poland in modern borders will be analysed. Due to the variety of source materials, the main objective of text is to present the initial concept of historical topographic objects’ database structure on the example of the integration of topographic data geometry. The problem of how geometry should be stored for each features acquired from the map should be solved. Firstly, each of them can have a separate entry position (Time-slice snapshots) in the database. Secondly, socalled “metaobject” grid with fixed geometry, but variable attributes can be used (Space- -time composite). Since archive maps are characterized by a largely low mathematical precision, therefore its content vectorization without considering the topological relationships between features seems to be incorrect. Maps’ elements belonging to the cultural landscape (e.g. settlements, communication network) should rather be stored with fixed geometry and variable attributes. In the contrast, the natural landscape (e.g. hydrography, afforestation), due to the different and difficult to capture changes especially on inaccurate maps (e.g. course of the river) should be stored with individual geometry for each feature depicted on each map.