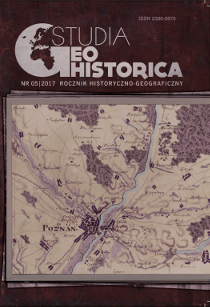 Summary/Abstract: Even though settlement network reconstruction was (and still remains) a popular topic in geographical and historical research, it seldom considers questions of reconstruction of natural landscape. Lack of such studies could have been described both by focusing on other research goals, and by the absence of appropriate tools, which are now encapsulated in the GIS (Geographic Information System). The aims of the present study are as follows: to analyse previous works concerning afforestation reconstruction in a cartographic manner for Early Modern Times; to indicate the usage capabilities of Dutch-type (Polish: olędrzy or olendrzy) privileges in this respect; and – last but not least – to provide a scientific edition of selected documents from the Poznań State Archive (Archiwum Państwowe w Poznaniu). The present state of art clearly indicates two approaches dominant in the afforestation reconstruction. The first one is based on the assumption that there used to be a sort of “pre-forest” growing almost everywhere before the Medieval colonization started. This statement can be undermined as even in prehistoric times the activity of mankind had a significant impact on natural landscape (e.g. forests grubbing). According to the second approach, some works (e.g. Historical Atlas of Poland of the 16th c.) show forest network as being based on 18th and 19th c. cartographic sources. Within this framework, the remains of the so-called pre-forest can be distinguished in scrubs and bushes. The main assumption is that a huge forest on the borders of two 16th c. districts of Poznań and Kościan had existed until the turn of 17th c., when it was cut down by Dutch-type settlers during the 18th c. The above mentioned Dutch-type privileges give some insight into the forest (including its type) which had grown on the particular area before the colonization began. Relying on the information about the amount of land given to the settlers by land owners not only can we distinguish the scale of deforestation, but also indicate the specific forest type, i.e. deciduous, coniferous or mixed. This information can be compared with maps and also verified against the contemporary state. It transpires that a reconstruction of 16th c. afforestation might be possible, but rather than being based on privileges data, it should also refer to other information like cartography, soil data, onomastics, and archaeology.