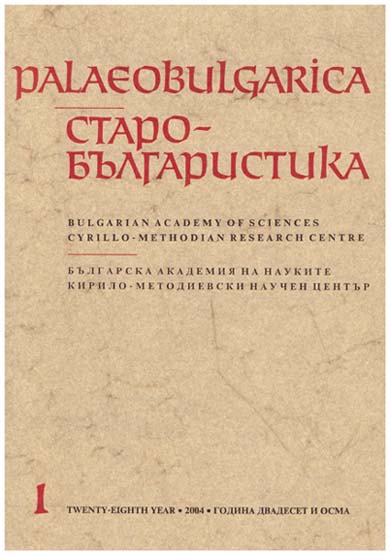 Summary/Abstract: The article is dedicated to a very rare type of autograph found on a 13th с. painted curtain in the Boyana churchyard (St. Pantaleymon: † кортина рек[ше] завѣс писа... ‘Frontal called curtain painted’) and in Turnovo (The Forty Holy Martyrs from Sebaste: The year 6720 (&СТ К ѱ ΛѢТО =1211/1212 A.D.). The northern wall (arkosoleion) and the altar (diakonikon) of these two churches still treasure the author’s dedications. The topographic location and the inscription in monumental mannered letters appear as an overall autograph model. The Boyana bilingual signature could have been influenced by the syncretic Latin culture coming down to us from Western influences of 1259 church art. Provincial artists (for example priest Dobreisho) were likely to put their bilingual signature to their work in a triumphant manner. Signatures found on the curtain by the Master from Turnovo and the Boyana painter Dimitar show us that they were not only the producers but the donors as well, making thus sure that they did everything for the expected end of the world when the curtain of the temple will be torn once again.