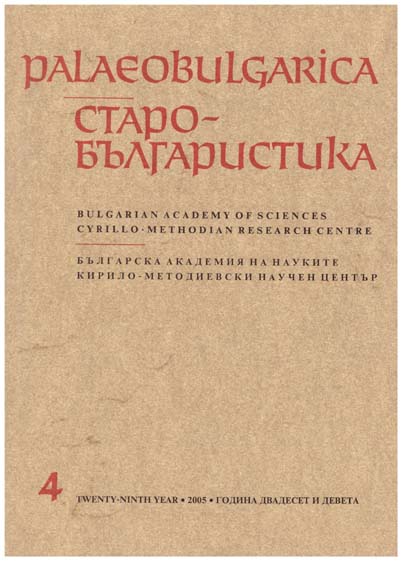 Summary/Abstract: The rings with monograms reflect the status of Kubrat during three stages of his life, namely, the family initiation, the ruler’s investiture and pragmatic function. 1. Initiation into Manliness and Christianity. The ring was probably a gift made by the God Father and the emperor Tiberius about the year 600. The monogram gives the possibility for various readings in the sense of the Byzantine play upon words and implications as a ring belonging ‘to Kubrat’, ‘to Kurt bat’ (a charismatic name to the wolf from the family List of Names) and belonging ‘to Batrah’ (a name given to a bishop from the 5th c.). 2. Initiation as a Patrician with Roman Power. The ring-signet with monogram in Greek: ‘belonging to the patrician Kubrat’ was given by emperor Heraklius. 3. Initiation into the Dynastic Power over Great Bulgaria. The ring-signet with monogram in Bulgarian: ‘belonging to Kubrat’ was probably made in 635 in connection with the establishment of the selfgoverning union of the five Dulo clans and five Ermi clans in the Turkish khaganate. The letters seem to be transformed into two bows and ten arrows, reminding one of the symbolism of the family and state unity of the Onogurs in the Legacy of Kubrat. The rings of khan Kubrat symbolize the embodiment of the claims which the Huno-Bulgarians had over the territories of Eurasia from the steppes of the Turkish and Avarian khaganate to the Roman Empire. A golden ring from Rome was given also to Attila, the ancestor of Dulo in the List of Names. The Persians by tradition wore three rings: one on the thumb, the second one on the fourth finger and the third one on the little finger with the help of which they pulled the bow-string, whereas the forefinger and the middle finger remained stretched.