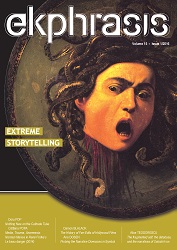 Summary/Abstract: Japanese cinema, one of the most eminent in the world, has a long history of interesting and distinctive modes of storytelling. Since the early beginnings of film viewing, Japanese audience was accompanied with the figure of benshi – a narrator or group of narrators “explaining” and providing an audience a “fuller experience” of what was projected on a silver screen. Considering the cinematic storytelling process, in spite of diverging from classical Hollywood narrative, the “unique” styles of the Golden Era directors – Ozu, Mizoguchi and Kurosawa have been highly commended in the West. This paper explores the extreme narrative in Japanese film Symbol (2009) directed by Hiroshi Matsumoto, in which two disparate storylines converge in the end. The first narrative follows a day of Escargot Man, a masked wrestler in Mexico preparing for the night’s match, whereas the other focuses on a Japanese man trying to escape from the surreal white room. Time and space of the white room narrative, cross-cut with the conventional episode in Mexico, operate as a plot device that engages the audience in the puzzle-solving cinematic experience. Examining Matsumoto’s method of associating the “real” to the mystic heterotopic scenery, this paper foregrounds both cultural and technological factors of Symbol (ranging from silent comedy genre to Japanese pop-cultural phenomenon of nanasensu) which contribute to its originality of the narrative form, distinctive among the postmillennial authors who have already famously strained from conventional storytelling. Furthermore, drawing on notion of both mind-game and puzzle-solving film, proposed by Elsaesser and Buckland, I argue that Symbol, as a typical postmodern mixture of elements, offers a new type of referentiality when dealing with the subject of extreme storytelling and its presentation to millennial audience.