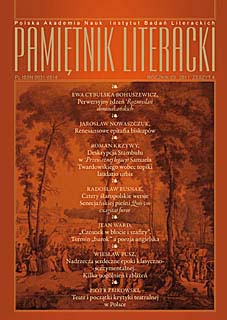 Summary/Abstract: The aim of the article is to shed light on the means of poetic expression in Jan Kochanowski’s “Laments” which manifest silence, concealment, or deliberate omission of some issues in the statements of the poem’s protagonist. Comparing similar figures of speech in Greek tragedies and in “Laments,” the author proves that Kochanowski took advantage of the literary tradition in a peculiar way: not only did he adopt the past figures of speech and incorporate them into new contexts as well as supplement them with new meanings, but also partially recalled pictures and motifs from ancient texts to juxtapose the traditional meaning of topoi with new semantic contexts. In effect, Kochanowski greatly enriched the lyrical implication of “Laments” since the vividness of funeral poem devoted to the little Orszula became to some extent multidimentional as it accumulated the old (familiar to literary tradition) meanings and the new ones which voiced the existential questions and doubts of a 16th century man.