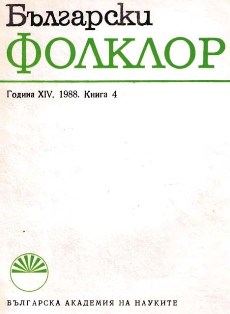 Summary/Abstract: The main issue discussed in the present article is the penetration of texts of foreign ethnic or linguistic origin, set down in writing and in literary circulation (epic songs from the collections of Vuk Karadžić, in this particular case) into the live Bulgarian folk epic tradition. Some basic theoretical problems from the sphere of contacts between folk traditions have been here considered to this effect. The following typological features associated with such contacts have been discussed in their interdependence: 1) borrowing in folklore should be analysed as a process by taking into account the forms of contact; 2) resulting influences should be studied as a historical category; 3) the mechanisms of the borrowing should be studied in detail; 4) a typology of the results from the interactions should be worked out; 5) the evaluation of the folklore bearers themselves should be studied; etc. The author also discusses the problem of written sources of folk epic tradition in Bulgaria, paying special attention to the part the chapbook played in it. She also stresses the fact that, at the outset of his activity as a collector and publisher, Vuk Karadžić was also influenced by the chapbooks and used their pattern when compiling his first collections. The discussion is illustrated by several epic folksongs from the collections of S. Vatev and G. Popivanov, which, after a detailed text analysis, can be related to the ones borrowed from the Serbian epic tradition and that from a written source. Finally, the author underlines that even in the case of a borrowing from a foreign written source, the folk tradition incorporates only that part, which could organically be fitted into the proper system, since, in so far as subject-matter and motifs go, the Bulgarian epic tradition abounds in ingeniously elaborated versions, which are typologically but not genetically similar to the Serbian ones.