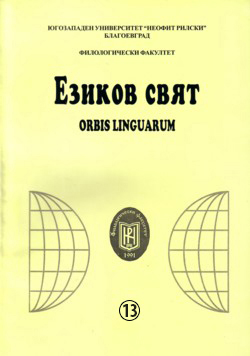 Summary/Abstract: The subject of this article is the inferential (renarrative) forms in Bulgarian and their functional equivalents into Greek. The lack of such a mood in the Greek verb system brings to asymmetry between the two languages to that regard and causes difficulties in translating from Bulgarian into Greek and vice versa. The interest for that linguistic phenomenon was specifically roused by the difficulties encountered by the Bulgarians studying Greek in their attempts to convey the inferential (renarrative) mood into Greek. The research is based on a corpus consisting of original Bulgarian texts translated into Greek.