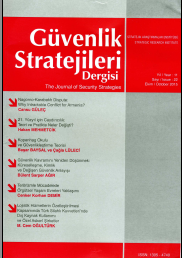 Summary/Abstract: The state-centric and military-based security conception, which was conceptualized in the respect of international anarchic system, has been reconsidered with the end of the Cold War. In this article, difficulties of traditional security conception in defining of widening agenda and deepening actors of security will be addressed in the context of relationship between globalization and security in post-Cold War era. Connected to globalization process, the close connection of identity concept with integration and fragmentation processes obliges the analysts to focus on the relationship between the concepts of security and identity. Because, although globalization accelerates the integration process in economic, political, social and cultural realms, the homogenizing tendencies of globalization instabilize the existing identities and encourages the resistance of local identities. Thus, nation-state itself has to face both the globalizing and localizing pressures from below and above of it. As a result, a perspective, which solely focuses on state security but ignores the security of social groups, would have difficulty for considering the essence of the problem. In this respect, it is needed to place a normative conception, which considers the security requirements of individuals, social groups and humanity in security policies. This article emphasizes the importance of social structures such as identity in understanding of relationship between globalization and security in terms of method. It aims to evaluate the changing security conception in the framework of identity and globalization process in a critical manner. Thus, it targets to contribute to the security studies literature in Turkey.