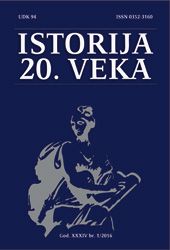 Summary/Abstract: Negotiations on the signing of the post-World War II trade agreement between Yugoslavia and Italy were held in an atmosphere of political crisis and deteriorating bilateral relations. Numerous unresolved mutual political issues as well as tense international circumstances influenced the course of the negotiations. The unresolved issue of the status of the city of Trieste and the entire Venezia Giulia created an atmosphere of mistrust and increased tensions. The substantial political and economic support provided by the United States to Italy caused further difficulties for the negotiating position of the Yugoslav government. Political relations between the United States and the Soviet Union became very difficult after the Marshall Plan, which began to be implemented in June 1947. During this period, the Yugoslav-Italian trade agreement was signed. This trade agreement was contingent on solving other issues between Yugoslavia and Italy, particularly those relating to fishing, and this hampered negotiations and intensified its political character. Trade issues were perceived in the context of political relations and economic reasons were not decisive. The trade agreement, carefully prepared during mutual consultations of experts of both countries, was initialed on 17 April 1947 and signed on 28 November 1947 under political pressure. This apparent treaty signing delay was caused by the two governments downplaying political considerations and recognizing the urgent economic needs of market logic. The new trade agreement between Yugoslavia and Italy was finally signed on 4 August 1949.