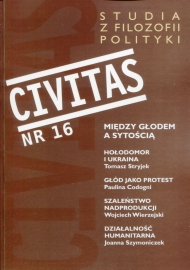 Summary/Abstract: The author analyses the contemporary narrative of the Great Famine of 1932-1933 (Holodomor) in Ukraine in two contexts: the policy towards the state’s memory after 1991 and academic historiography. The first part of the article points to the fact that the Great Famine has become a modern foundational myth of Ukraine. The myth is compared with the myth of Sweden, which also relates to the nineteenth- and twentieth-century history and the fight to ensure food self-sufficiency of the nation. However, the messages of these myths turn out to be different. While in Sweden it expresses the society’s successful fight for the fruits of the earth, in Ukraine it has remarkably martyrological connotations – from the seventeenth to the twentieth century, the neighbouring nations and states have been playing the roles of perpetrators of poverty and misery of the Ukrainian people. The second part of this paper is devoted to the analysis of differences in the interpretations of the Great Famine made by two contemporary Ukrainian historians: Stanisław Kulczycki and Heorhiy Kasyanov. The former has eventually come to the conclusion that the Great Famine was caused by the genocidal policy of the Soviet authorities towards Ukrainians as a civic nation (2008). On the other hand, Kasyanov claims that the Great Famine was triggered unintentionally by the state authorities. In his opinion, it resulted from the chaos of forced collectivization policy, and then was used by Moscow to break the emancipatory aspirations of the Ukrainian elite. While the author admits that the second of these interpretations is more relevant, he does not fully agree with Kasyanov’s postulates regarding the way of presenting the disaster to the public. The “antropologization” of the narrative would be convincing for academic historians, but others would find it hard to understand. According to the author, the Great Famine was the second largest disaster caused by man in the history of Europe, next to the extermination of Soviet prisoners of war and the population of the occupied territories of Eastern Europe by the Third Reich. As such, it marks the history of Ukraine in a special way. The author agrees with Kasyanov’s criticism of presenting Holodomor as the genocide of the Ukrainian people carried out by Russians.