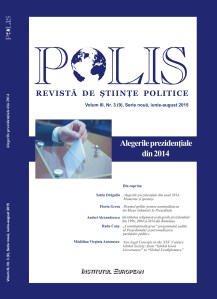 Summary/Abstract: The final debate represents the most broadcasted event of the electoral campaign for the presidential title. Considered risky by the candidates, awaited by the citizens, the final debate succeeds to inform and entertain in the same time. With both their assets and clumsiness, the candidates are faced with each other in order to introduce themselves to the electors and to ask for their votes. In this article I have introduced a short presentation of the presidential debates from the post-Decembrist Romania, followed by an analysis of the 2014 debate, where I have included the first round of the debate hosted by Realitatea TV, and the second one, broadcasted by B1 TV. I have used as a basis the framing theory, and as research method, the content analysis. From la Semetko & Valkenburg (2000) I have taken the classical grid of analysis of the five frames (the attribution of responsibility, the human interest, the conflict, the morality, and the economical ones), and I have watched the prevailing framings within the presidential debate broadcasted by the two televisions. I have also made an analysis on which are the most prominent themes approached by the two rival political actors during the debate. According to the previous research in this field, for both candidates the dominant frame was the conflictual one, followed by the moral-legal one, and by the attribution of responsibility. Surprising is only the economical-consequences frame representation, which lacked consistence. The themes which carried the highest weight in the presidential debate were those related to the weak organization of the elections for the Romanian citizens who voted abroad, the suspension of the amnesty and pardon law, the enforcement of the anti-corruption fight and the support of the authorised institutions, the institutional collaboration between the president and the prime-minister, Romania’s relationships with the foreign partners, and future strategies for the economical-development of the country.