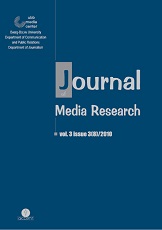 Summary/Abstract: Considered either a means of communication between an organization and its publics or an autobiographical means through which organizations mould their identity, press releases also become textual structures which help in the negotiation of political, cultural, social and economic meanings. The empirical data to be analyzed are press releases that express a position to some previous attacks (Coman, 2004) issued by the City Hall of Bacău in 2008. This type of press releases involves the existence of at least two categories of participants: the City Hall, metonymically represented by Romeo Stavarache (the Mayor and a LNP member) and the journalists from the Deşteptarea (a newspaper that is the metonymic representation of the Social Democratic Party/ SDP). The theoretical framework will combine two methods: a) “word clouds” method (Feinberg 2008) for the prominence of conflict themes; b) the narrative methods of deconstruction and intertextuality (Boje, 2001). They will be used in order to render, at the microdiscursive level, a causal framework of themes and an expressive representation of voices, and, at the macrodiscursive level, the framework of a (post)election local show.