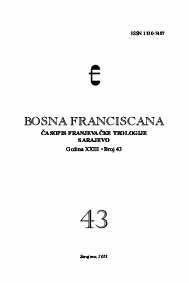 Summary/Abstract: Even before the Bolshevik-Communists took over power in 1945 in Bosnia and Herzegovina they mercilessly systematically eliminated their real or fi ctive enemies. The most drastic example of this practice is the execution of all the Franciscan friars in their monastery in Široki Brijeg in west Herzegovina in the beginning of February 1945. With varied intensity murder, persecution and discrimination of religious lasted as long as their State Yugoslavia existed. Apart from Archbishop of Zagreb Aloysius Stepinac (1937–1960) and Bishop of Mostar Peter Čule (1942–1980) a large number of other priests suffered persecution, amongst them was a Bosnian parish priest D.Th. Fr Borivoj Batinić (1913–1965). During the days of communist systematic persecution of religious, persons of dubious moral stature, provocateurs from the ranks of the secret Yugoslav police and even members of other religions were used, the latter to foment interreligious and national frictions. Fr Borivoj Batinić was a victim of this practice already from the middle of 1945, while he was a spiritual assistant of the Catholic Parish of Prophet St. Elijah in Zenica in middle Bosnia. In the Supreme Court judgment of the Bolshevik-Communist Peoples Republic of Bosnia and Herzegovina of March 2, 1953 it was stated that he was sentenced to a strict prison sentence of 3 years and six months for, amongst other “sins”, of being a “highly educated person”.