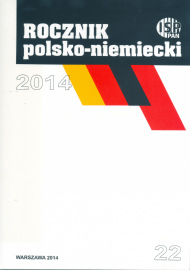 "Z Polską małżeństwo z rozsądku, a nie z miłości". Polska i Polacy w "Dziennikach" Josepha Goebbelsa (1924-1939)
"With Poland, it's Marriage of Convenience rather than Love". Poland and the Poles in "The Diaries" of Joseph Goebbels

Summary/Abstract: "The Diaries" of the Third Reich’s Minister for Public Enlightement and Propaganda, Joseph Goebbels, amount to around 35 000 pages altogether. After myriad obstacles had been overcome, they were published in print in Germany in 1993–2006, with a separate supplement, consisting of three volumes with indexes of places, persons and subjects, following in 2007–2008. More recently, a three-volume edition of excerpts, translated into Polish and furnished with added endnotes and an introduction, was published in 2013–2014. It focused on Polish issues, taking into account every reference to Poland, even the very smallest. The author of this article analyses Goebbels’ entries in respect of Poland and Poles in detail, paying attention both to their quantitative aspect and to their subject matter. In quantitative terms, short entries, often telegraphic in style, are the most plentiful; those of a medium or more extensive length are very scarce.In view of the immense number of pages of "The Diaries" which have been preserved and published in print, this is a modest representation. It is, nevertheless, cognitively significant and refers to events important from the point of view of Polish-German relationships and international issues.There are several ‘Polish’ topics in "The Diaries"; they run, like the proverbial red thread, over several pages or even a dozen or so. They include such matters as Goebbels’ visit in Poland in June 1934 and the Third Reich’s persuading of Poland both to take part in a joint march East and to invade Czechoslovakia in October 1938. The issues relating to the preparations for the attack on Poland in September 1939 in German propaganda are referred to particularly extensively. The author’s analysis is supplemented with numerous notes, both on the subject matter and bibliographical details.