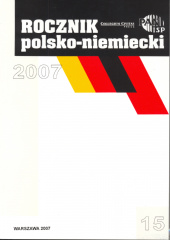 Czy w polskim filmie fabularnym lat 1956-1995 istnieje wizerunek "dobrego Niemca"? Przyczynek do dyskusji nad heterostereotypem narodowym w relacjach
Does the image of “a good German” exist in Polish feature ﬁ lms of the years 1946–1995? A contribution to the discussion on the national heterostereot

Summary/Abstract: In the article, an attempt has been made to determine the presence of a German motif in Polish feature ﬁlms made in the second half of the 20 century. The author conducted a review of ﬁlms, choosing titles containing images of the German, as well as establishing the Polish-German references present in various historical contexts from the Middle Ages, through modern and most recent history and up to the contemporary, shaped by the Second World War. The materials collected and selected are subsequently subjected to a quantitative and qualitative analysis. Finally, it is established that of the 981 Polish feature ﬁlms distributed in cinemas during 1946–1995, 236 (24%) contained, to a lesser or greater extent, a developed German plot line, or referred to it in reminiscences. Amongst these ﬁlms, 85% are linked to the events of 1939–1945. An important section of the article consists of the characteristic portrayal of the German which appears in Polish ﬁlms. In what is decidedly the majority of case, these are characters invested with unequivocally negative features. A small number of ﬁlms made an attempt at differentiating between German roles; only a few included the “good German”, representing a friendly, or, at the very least, well-disposed attitude to the Poles. In discerning the cause of this state of affairs, the author draws attention to an entire complex of emphasis are the experiences of the war which, in Polish eyes, authenticate the presence of the “bad German”. At the same time, the propaganda function of ﬁ lm in post-war Poland must not be forgo en. In the People’s Republic of Poland, ﬁ lm, alongside other mass media, served to prolong the portrayal of the German enemy of Polish society. The ﬁnal upshot is that after 1989, the “centuries-old” German enemy disappeared from Polish feature ﬁlms. However, a new formula for perceiving the German has not materialised; that task stands not only before ﬁlmmakers, but also before writers, journalists and – last but not least – historians and political scientists.