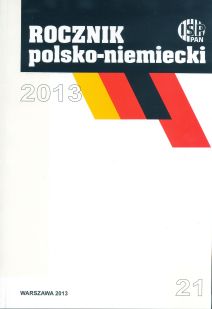 Polska edycja Dzienników Josepha Goebbelsa. Czy potrzebna?
The Polish Edition of The Diaries of Joseph Goebbels. Is It Necessary?

Summary/Abstract: In the early 1990s, it transpired that the reportedly lost or only partially preserved Diaries of Joseph Goebbels, Reich Minister of Propaganda and Public Enlightenment, had been found in one of the central archives in Russia. On the basis of that discovery, an edition of this important resource for the history of National Socialism was published in thirty-three volumes by the Institut für Zeitgeschichte (Institute of Contemporary History). The article comprises a concise description of both the fi gure of the Diaries’ author and his opus, which encompasses his journal entries from 1923 to 1945. The regularity and profusion of the material are astounding, as is the broad panorama of the issues broached. The focus of interest for the author of the article is the usefulness of the source from the viewpoint of not only modern German history, but also international topics. Of particular importance are those portions of the Diaries which, in the subjective opinion of the article’s author, depict the road that led to the outbreak of World War II and its subsequent course, as well as the events which brought National Socialist Germany to defeat. A part of the Diaries also consists of entries relating to Poland and the Poles and is chiefl y focused on the genesis of the war, the Katyn Massacre, the Warsaw Uprising and the process of the Soviet Union’s enslavement of Central-Eastern Europe and Poland as hostilities were coming to an end. A forthcoming Polish publication containing a selection of Joseph Goebel’s journal entries deemed by author of the article and, at the same time, of the Polish edition of the Diaries, to be both representative and cognitive, is announced.