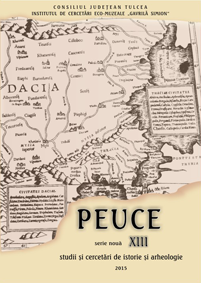 Summary/Abstract: This study aims to put emphasis for the first time on a chapter in the long and fascinating history of Cucuteni culture in Bucovina. This historic region that existed for 143 years (1775-1918), administered at first by the Habsburg Empire, followed by the Austrian-Hungarian Empire, draws special interest. Here, in a small and remote Austrian province, remarkable finds surfaced, being part of both Romanian and Austrian archaeology and of European historiographic landscape. The exceptional value of the prehistoric sites and artefacts from Bucovina ascribed to Cucuteni civilization drew the interest of Vienna authorities that, following the early practices, sent their best specialists to catalogue, research and publish the finds. The catalysts were “The Central Commission for the research and conservation of the historical and artistic monuments”/„Zentralkommission für Erforschung und Erhaltung der Kunst-und historischen Denkmale” and “The Anthropology Society”/„Anthropologische Gessellschaft”, through their professionals and prestigious publications („Jahrbuch” and „Mittheilungen”). The publication in Vienna in 1899 of the impressive monography “Die österreichisch-ungarische Monarchie in Wort und Bild. Bukowina” where Josef Szombathy published a documented chapter entitled “Vorgeschichte”, amply presenting the prehistoric finds in Bucovina, crowns researches of both Austrian specialists and Romanian cultural figures in Bucovina over several years. Karl A. Romstorfer, Raimund F. Kaindl and Josef Szombathy carried out meritorious work of recovery and publication of the unearthed archaeological material, therefore we may consider them real pioneers of Cucuteni culture research. Thanks to them and to some warm-hearted Romanian or Austrian researchers born in Bucovina, of whom we selectively mention Dionisie Olinescu, Constantin Morariu, Vasile Tomiuc, Vasile Arici, Emanuel de Costin, Otto Petrino, Josef von Gutter, Heinrich Klauser, Cucuteni vestiges of impressively beautiful shapes and painted motifs were unearthed, drawn, restored and exhibited in the museums of Vienna and Chernivtsi. The foundation of the two archaeological societies in Bucovina – Society of the Museum of Siret and the Romanian Archaeological Society of Chernivtsi – along with the set up in 1875 of “Franz Joseph” University of Chernivtsi (1875) and of the “Museum of the Country of Bucovina” (1893) had a major impact not only on prehistoric research, but also on the conservation, display and publication of the discovered archaeological materials. All these data, synthetically presented in this study, are part of the pioneering phase of archaeology, the phase of recovery of the first vestiges of Cucuteni culture in Bucovina. Although at that time (second half of the 19th century) their discoverers did not know its “real” name, the value of the information transmitted to present times is extraordinary.