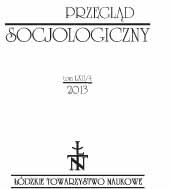 Summary/Abstract: This anniversary text is meant to show the image of professor Jan Szczepański, which rise from the letters send to him, first of all the private ones. That correspondence, situated in the archive of museum in Ustroń, deepens our knowledge about him as a prominent scholar, but also reveals his extraordinary personality. We can realize in how various social initiatives he was engaged and how highly esteemed by the representatives of very different environments he was. The plurality of requests and thanks addressed to him more than about his influences or frankness tells us about real actions, which he did not hesitate to undertake in the name of justice and his own ideal of a reliable human. The letters presented in this sketch, including mainly the years 1979–1982 as well as 1989–2000, relate to i.a. political situation in Poland in early ‘80s, scientific publications, foreign departures, matters connected with the activity of different institutions, the current social phenomena, the support given to young scholars by the Professor, and also his public pronouncements and functions. Among the senders we can find people from the world of science or culture, catholic and evangelical clergymen, politicians, social activists, journalists, but also the common men, turning to him with their problems. They all create a polyphonic tale about Szczepański, which presents him not only as a sociologist attributed to the period of the Polish People’s Republic. A lot of his conceptions seems to be still topical, doubtlessly we can consider as such the ethos confessed by him.